The naming database - the public database that keeps the names of the users, and the corresponding public keys - is a single point of failure in this scheme. Making this database fault-tolerant, tamper-resistant and censorship-resistant is critically important for the security of the decentralized network. Blockchain is a natural choice for this task.

Blockchain is a public database that is kept simultaneously on any number of independent nodes that do not trust one another. No permission is needed to become a node.

Records in a blockchain are called transactions.

Transactions in the Moera blockchain operate on names. After some user takes ownership of a name, further operations on this name are not possible without knowledge of a key. This key we call updating key.

The private updating key is used very rarely - only when it is needed to make changes in the naming database. Keeping it on a computer is unnecessary and poses a security risk. Instead of this, we display the key to the user in a human-readable form (as a sequence of 24 English words) and encourage to write it down on a piece of paper and keep the paper somewhere in a secure place. 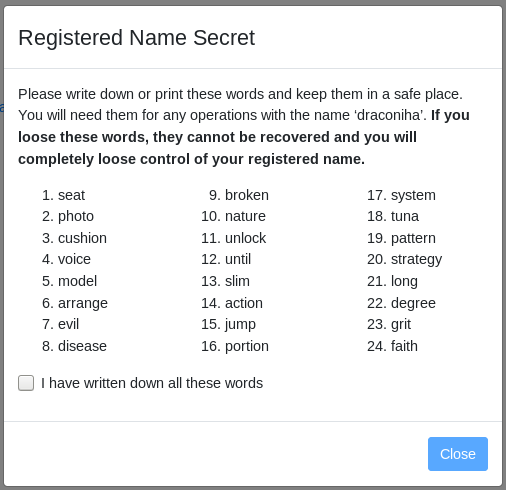 The private signing key must always be present on the home node to be able to sign messages. What to do, if due to some security breach it is stolen?

If the updating key is not stored in the computer, it will be safe. The owner can use it to change the signing key in the blockchain. From that moment the old signing key will be invalid, messages signed with it will no longer be accepted (but for older messages the signature will still be considered correct).

More than that, the owner may set the date of the key invalidation in the past. In this case, even if the intruder had a chance to perform some operations (post messages, delete them etc.) before the hack was revealed, these operations may be undone.

Nodes should be aware of this possibility. For every name they deal with - to validate signature, give access or collect information - they should subscribe to notifications to know if the corresponding key have been changed. They should store enough information to undo the operations that can be undone - content of deleted messages, previous versions of the edited ones and so on. We limit the undo feature to up to 1 week in the past. It will be enough for most cases and will not require nodes to store too much of extra data or to follow too many names.

Recap of the consensus rules

A transaction is considered invalid if and only if at least one of these conditions is true:

Anybody can run a naming server, and a node may select from these servers on the basis of latency, uptime, trust or any other considerations. If you don’t trust any naming server, you can always run your own - that’s why naming servers have almost no reason to provide incorrect information to the nodes. Rare occasions of fraud will be quickly revealed.

Moera clients may also use naming servers to get the information about signing keys and to verify signatures on the client side.

For every registered name we also store in the blockchain the URL of the node this name is assigned to. This information has many uses, for example: